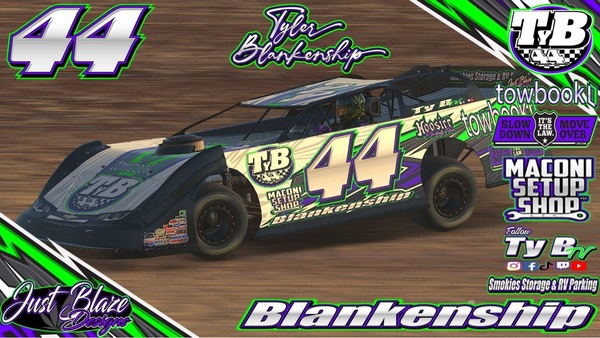 After a long move and transition from West Virginia living to the largest vacationed area on the east coast Tennesse, TyB made is debut. With his full motion rig being disassembled and lack of internet at his new property, TyB was forced to step away from Live streaming for months. He made many updates to his race rig to accommodate any future moves for the rig as well as a new rolling platform to allow 360 degrees of access to the rig. The platform makes this monstrosity of a rig mobile. We may see mobile streams thru out the Pigeon Forge and Gaitlinburg areas in the future, however for now the platforms main function is to allot TyB to move the rig to its future permanent home, TyBtv Race Shop. Still under construction and awaiting building plans and funds, the TyBtv Race Shop hopes to launch in the fall of 2023. Located near the Smokies Stadium and Buckeys- the largest of its chain gas stations, TyBtv Race Shop expects to have racing memorabilia on display as well as a dirt race track hosting race cars from the past to present theme where guests can see the changes improvements and evolution of race cars. “I would love to have a place where racing enthusiasts can come and enjoy the roots of racing, dirt track racing. TyB said last week in an interview. “Dirt track racing is where racing began and began die me and others like me. This will be a place where racers can relate to the cars with experiences they may have had in their past.” TyBtv Race Shop will be one of the many new attractions at the developing Gateway at 407.